Yesterday the Padres announced the signing of veteran catcher Henry Blanco to a one-year deal.

Throughout the off-season we have been discussing the idea of bringing in a veteran catcher who could help mentor both our young catchers and our young starting pitchers. We feel that Henry fits the role perfectly, especially since he has maintained an 86.2 MR (mentor rating) over the past three seasons.

Known as a solid defensive catcher, Henry has thrown out more than 40% of runners throughout his career (45% over the past three years). As is often the case with catchers who throw that well, runners also don't attempt to run as much. Put those two together, and Henry has allowed an average of one stolen base per 18 innings caught throughout his career. As a comparison, our Major League team last year allowed one stolen base for every nine innings (Johnny Bench allowed one for every 24 innings). It's not just his throwing, either, as Henry has consistently been above average in virtually every defensive metric.

On the offensive side, Henry provides a little pop, hitting at least six homers in seven different seasons, including every season in which he's received at least 175 plate appearances. Last season Henry hit .292/.325/.392 in 128 plate appearances while backing up Geovanny Soto in Chicago.

We're happy to add Henry and believe that he'll be a stabilizing force at a critical position.
Posted by Paul DePodesta at 11:06 AM 31 comments:

Today we announced an agreement on a one-year deal with Heath Bell, thereby avoiding the arbitration process. This was our final arbitration eligible player for this winter, as we've reached agreements with Scott Hairston, Jody Gerut, and Luis Rodriguez in the past few weeks (I say "we" but the bulk of work was really done by Jeff Kingston, our Director of Baseball Operations). The result is that the Padres won't be involved in any of the arbitration cases next month. In fact, we didn't even get to the point of exchanging filing numbers with any of our players.

Arbitration is never a pleasant (or terribly productive) exercise for the parties involved, which is probably why fewer than 10% of the potential cases ever see the hearing room. The system is pretty straight forward:
Among other things, these hearings can: cost time, cost money, create animosity, and take both the Player and the Club away from Spring Training. The system is far from perfect, but for all of the aforementioned reasons the current structure does a reasonable job as a deterrent. Regardless, it's nice to go another year without a case. Thanks, Jeff.

Once again, I have to point out that there was something even more important that happened today than the Heath Bell signing. I heard there was something going on in Washington, DC, but my older son wouldn't know anything about that. He only knows that today is his 5th birthday, and he's pretty excited about it. I am, too.
Posted by Paul DePodesta at 3:04 PM 18 comments:

Today we signed INF David Eckstein to a one-year deal and claimed RHP Jae Kuk Ryu off waivers from the Tampa Bay Rays.

Eckstein doesn't need much of an introduction. He has spent the past eight seasons in the big leagues, playing shortstop mostly with the Angels and Cardinals. Over those years he compiled a .284/.351/.361 line (including two World Series rings) while establishing his reputation as a winning player. David is a true grinder who is a very tough out and does all the little things well - a great example for our younger players. We expect him to play primarily 2B in 2009, which was his position in college and throughout the minor leagues (anyone know who played SS on David's college team?).

Jae Kuk Ryu is a 25-year old right-handed pitcher from Seoul, South Korea. Originally signed for $1.6 million by the Cubs in 2001, Ryu has spent parts of the past three seasons in the Majors with Chicago and Tampa Bay. His 2008 season ended prematurely, however, as he was shut down in May and had relatively minor elbow surgery in June. Ryu's fastball sits around 90 mph while reaching as high as 92, and he complements it with both a curveball and a changeup. According to our scouts, all of his pitches grade out as at least Major League average, and he can throw all three for strikes. Given his repertoire and success as a starter in the minor leagues, we believe Ryu can compete for a spot in our rotation or our pen. He has one minor league option remaining.

We still have just under a month to go before pitchers and catchers report and there are a lot of players still out there, so I would guess there will be more activity forthcoming.
Posted by Paul DePodesta at 3:34 PM 29 comments:

In the past few days, we've added three more players to our Major League Spring Training, and we're now up to 58 players in camp. These days teams generally will have anywhere from the low 50's all the way to the 70's in their camps. There are stories of spring trainings that reached over 100 players, jersey number 101 and everything, but it's been a while since that has happened. It can be difficult to strike the right balance between getting a look at as many players as possible while also creating enough opportunity for each player, but we feel we're well within the sweet spot at our current levels.

Our additions:
Mark Prior, RHP: A San Diego native, we signed Mark last year to a Major League contract after the Cubs declined to tender him a contract. After progressing well early in the spring, Mark had a setback that required another surgery and cost him the rest of the season. Mark has now lost the entirety of the last two seasons to injury, but when he pitches he can be dominant. In his first four seasons in Chicago (2002-2005) Mark used he power fastball/curveball combo to pitch 613 innings with a 3.24 ERA. Mark has been working out all winter here in Petco, and we're encouraged by his progress. If we can get him back and healthy for us in 2009 we believe he could make a significant difference.
Chris Burke, INF: A first round pick out of the University of Tennessee in 2001, Chris spent the first seven years of his career with the Astros before being traded to Arizona last winter. A SS in college and during his minor league days, Chris starting splitting time at 2B in AA as he prepared to be the 2B of the future for the Astros. After a big year in AAA in 2004 (.315/.396/.507 with 37 sb's) Chris has spent most of the next four seasons in the big leagues, though he never amassed 400 ab's in any one season. Due to the lack of consistent playing time and splitting duties at seven different positions, we're not sure we've seen the best of Chris Burke yet.
Virgil Vasquez, RHP: Unlike Prior and Burke, Vasquez is on the 40-man roster since we claimed him on waivers from the Red Sox. A right-hander from Santa Barbara, Virgil has spent the bulk of the past two seasons in AAA, though he did make five appearances for the Tigers in 2007 (the Red Sox claimed off waivers from the Tigers). Known for his excellent command, Virgil has walked just 70 hitters in 314 innings in AAA. We believe he could compete in a number of different roles.
And now for the really important stuff...
Today is my daughter's third birthday (she's the best!), so please allow a proud father to indulge: 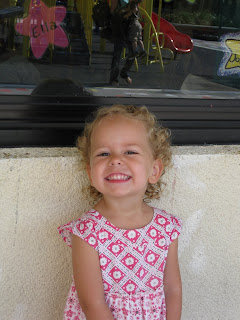 The blog has been quiet the last few weeks - I hope everyone had a great holiday season - but we've continued to pursue players who may help us in 2009 in a variety of roles. In past years the acquisition of guys like Heath Bell, Jody Gerut, and Luis Rodriguez didn't send shockwaves through the industry, but sometimes those are the deals that can have the biggest impact on the team.

Because our minor league system continues to mature, we have less of a need for the veteran AAA player who provides insurance at the Major League level - we are quite comfortable with the idea of many of our young kids filling those roles. Therefore, we have been able to focus on players we believe have a chance to compete for a job on the Major League team. So far this winter we have signed five players to non-roster contracts with invitations to Major League spring training. In alphabetical order:

Eliezer Alfonzo, C: Having played the last four seasons in the Giants' organization, and parts of the last three in the big leagues, Eliezer provides some Major League experience as well as a little power. In addition to slugging .435 in nearly 400 Major League plate appearances, Eliezer has also thrown out 38% of baserunners over the past four seasons combined.

Chris Britton, RHP: A 26-year old right-hander, Chris was drafted by the Orioles in the 8th round of 2001. After two seasons in rookie ball and a missed season in 2003, Chris moved to the pen in low A ball in 2004. Nevertheless, by the end of 2006 he had pitched more than 50 innings out of the pen for the Major League team, posting a 3.35 ERA. At the end of the '06 season, the Orioles traded Chris to the Yankees for Jaret Wright and over the next two seasons Chris pitched 85 innings in AAA (2.44 ERA) and 35 2/3 innings in the big leagues (4.54 ERA). Always a solid strike thrower, we believe Chris can compete for a bullpen job this spring.

Pete Ciofrone, 3B: Pete has played the last four and a half seasons in the Padres organization, but was due to become a minor league free agent after the 2008 season. After a .314/.389/.519 season in Portland, we wanted to keep the versatile left-handed hitter. Pete has always done a good job of putting the ball in play, and his power has emerged over the past two seasons. His ability to play all four corner positions also provides options for any manager.

Kevin Correia, RHP: A 28-year old from San Diego, Kevin has spent his entire career with the San Francisco Giants, including over four years in the big leagues as both a starter and a reliever. All told, he has pitched nearly 400 innings at the ML level with a 4.59 ERA. Kevin pitched primarily in the rotation in 2008, but in 2007 and 2006 while pitching mostly out of the bullpen Kevin posted a 3.47 ERA in more than 170 innings. He is a versatile pitcher who could fill a number of roles on the staff.

Oneli Perez, RHP: An original Padre signed in 2001 as a 1B in the Dominican Republic, Oneli made the transition to the mound in 2003. In 2004 Oneli signed with the White Sox and became a solid pitching prospect, eventually reaching their 40-man roster for two years despite not logging any big league time. Showing an above average fastball, the 25-year old has had excellent seasons in A, High A, and AA posting a combined 2.38 ERA with 284 strikeouts in 265 innings. 2008 was a bit of a lost season for Oneli as he bounced between three organizations (waivers can be tough), but we still view him as a prospect and believe he has a chance to help.

I know these aren't the names you read about on the front page of ESPN.com, but I wouldn't be surprised if we get some valuable contributions from this group, and others with whom we're still having conversations, in 2009 and beyond.
Posted by Paul DePodesta at 11:09 AM 17 comments: