The only bad part of the past four games is that I wasn't in San Diego to enjoy them. Last time I wrote, I was hopeful for a series win against Arizona, and we managed to do a bit better than that. Then in the opener against San Francisco Clayton Richard had a great start against Matt Cain, and we enjoyed a walkoff. Not only was it the 4th win in a row, but it was also the 4th game in a row in which we've gotten a good start from our starter, stayed in the game, and managed to score late off the other team's bullpen. Our hope throughout the winter and spring was that we had a staff full of starters who would keep us in games and a bullpen that could preserve leads. It won't work all the time, but it's fun when it does.

For my part, I've been all around the Southeast for the past four or five days. There are always a few variables when doing amateur scouting that keep life interesting. Pitching schedules are a big one. Booking advanced travel, and even packing with a purpose, can be pointless as schedules always seem to change from week to week, guys will only throw an inning or two, and even game locations can change. Due to all the above, I usually try to have a few position players worked in as anchors in my schedule, because I should be able to see them regardless. Unless, of course, it rains like it did yesterday. It happens.

As I've told my wife, going on these scouting trips has taken me to places that she'll never see...and really has no reason to. You may think you have lived a full life, but have YOU ever been to Caldwell, Idaho? Or eaten at a Denny's in Nampa on the way there?

The reality is that most of the time you just don't see a whole lot. Like the drive from Columbus, GA to Jacksonville, FL or from Hoover, AL to Hattiesburg, MS or even from San Diego to Phoenix. There just isn't a whole lot there. Sometimes, the ubiquitous signs from Walgreen's, Subway, and Starbucks can get depressing. Isn't there anything different? But then, every once in a while, you come upon something unique: 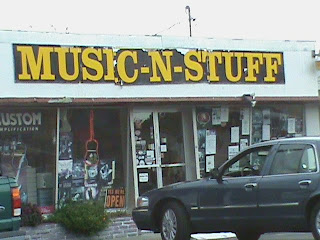 I wasn't brave enough to ask exactly what "N-Stuff" entailed. But seriously, how great is this?
Posted by Paul DePodesta at 7:58 AM 15 comments:

I just landed in Atlanta (approximately 3am San Diego time) after a brutal red-eye flight. I normally don't have an issue with red-eyes, and I figured that this one would give me an extra evening at home with my kids before I left, so I didn't hesitate to book it. When I saw that I had an exit row window seat, I figured I was in good shape. Then I boarded the plane.

First and foremost, my exit row was the first of two successive exit rows, which equals no reclining. That's a tough realization at 11pm before you even begin to taxi. Getting some sleep in an upright and locked position was going to be a challenge. Next nice feature? Bulkhead...against the bathroom. Now add in that my row was adjacent to the flight attendant station, which meant that the lights were on the entire time, and it was clear that my luck wasn't changing.

Did I mention that Atlanta is only a stopover? Yeah.

In any event, it was a tough game against the Braves on Thursday. They did a great job of getting key hits with two outs, and we just weren't able to cash in on some big chances despite good at-bats and hard contact. Sometimes that'll happen, but it's a little more frustrating when it wouldve meant a series win against a good team, and the Braves are a good team. Their lineup really doesn't have any outs (guys like Escobar, Heyward, and McLouth hitting at the bottom of the order), and their rotation is full of guys who can pitch like #1's on any given day.

Speaking of rotations, we've faced a tough run of starting pitchers in our first nine games. It's not an excuse, because we have to get it done regardless, but we've had just two, or maybe three, games against guys who would be considered less than a #1 or #2 on most teams. The off-days were a devil in disguise for us for the first week and a half.

Now we have a divison rival coming to town with some good crowds expected at PETCO, which would be the perfect time for a series win. I just hope to get a little bit of sleep between now and then.
Posted by Paul DePodesta at 3:37 AM 2 comments:

Today we officially placed Chris Young on the 15-Day DL retroactive to April 7 (since he hadn't pitched since April 6). The rule states that a Club can place a player on the DL and back-date the placement up to seven days assuming he has not performed in a game.

Chris felt some discomfort in his shoulder following his six inning performance in Game Two of the season. With our off-days we could have maneuvered our rotation and delayed CY's next start until the weekend, effectively skipping one turn. That was Option #1. Alternatively, we could have a spot starter for just one start, likely on Sunday the 18th, and have an extra person on the team in the meantime. That option also had the additional benefit of being conservative with CY's shoulder so early in the season. With those advantages, Option #2 became the clear choice. Hopefully CY will be back in the rotation in another ten days or so. In the corresponding move, Adam Russell was recalled from Portland.

The Good, The Bad, and The Ugly of Waiver Claims

Yesterday we lost Chad Huffman on waivers to the Yankees. You never enjoy losing a player, as you put him on your roster at one point in order to protect him. Nevertheless, these transactions always have multiple sides.

The Good
We're now at the point where we're losing good players in these situations, which speaks well of our organizational depth. Ok, I admit that's a pyrrhic victory of sorts. The main "good" to take from this situation is the acquisition of Aaron Cunningham (and even the re-acquisition of Scott Hairston). Aaron, in all candor, moved ahead of Chad on the corner OF depth chart, and the play of both Blanks and Venable didn't help either. Furthermore, we feel we have a couple of good corner OF's in AA San Antonio this season in Sawyer Carroll and Kellen Kulbacki. These guys now will have an increased opportunity. Here's hoping they take advantage of it.

The Bad
We lost the player. And, he's a pretty good one. Chad was a 2nd round pick in 2006 out of TCU and has been a successful minor league hitter throughout his pro career, posting an OPS over .800 in each season. While crushing lefties early in his career, Chad had his most successful year yet against RHP during his first season in AAA in 2009. He always controlled the strike zone and also hit for some power - a combination we like. We think he'll be a good Major League hitter.

The Ugly
The Yankees! In all seriousness, the last two guys we've lost on waivers this winter/spring, Mike Ekstrom and Chad Huffman, have been claimed by two of the best teams in baseball - the Rays and the Yankees (and the Rays also claimed Jose Lobaton late last season). At least they're both in the AL. They really don't need our help! Then again, it does reflect the relative, and growing, attractiveness of the players in our system.

This wasn't an easy decision, as we feel good about our 40-man roster at this point. We talked about a number of different guys and worked through various scenarios - who had the best chance to clear waivers, what depth did we have, what depth did we anticipate needing during the year, etc.

We hate to lose good players. Additionally, we hate to lose good people, and Chad is a tremendous clubhouse guy. Getting beyond the selfish aspect, we're excited for Chad. We truly wish him the best with the Yankees and will be rooting for him to make it to New York and contribute to the big league team.

There's nothing quite like winning to get me back to writing!

On numerous occasions I've wanted to get back into the flow but just couldn't for one reason or another. Now that the season is underway, however, no excuses are valid.

Though it was slow to progress, it was a productive off-season as we were able to add a number of pieces to the Club to solidify our depth. Those moves combined with the continued maturation of our player development system should make it easier for us to navigate the inevitable injuries and other obstacles that will come our way over the course of the season. Last night was a perfect example...

We entered spring training relying heavily on our back four relievers and maybe most importantly on our one tough left-hander, Joe Thatcher. However, Joe battled a sore shoulder through spring training, so we decided that it would be best for him to start the year on the disabled list. Though we had a number of good right-handed options in Adam Russell, Ryan Webb, Ernesto Frieri, Radhames Liz, Greg Burke, Luis Perdomo, etc, we turned to left-hander Cesar Ramos, a starter throughout his career, and asked him to assume that spot in the pen. Last night he entered the game with the bases loaded and just one out to face Stephen Drew, a situation that he has never faced in his baseball career. He made two excellent pitches resulting in a weak groundball to short for a big out. Exhale.

It's easy to say that Chris Young deserves the game ball for last night's win with six innings of one hit ball against a tough lineup, because he probably does. Or maybe Everth Cabrera gets the game ball with a single, double, triple, stolen base, and four rbi (damn, that was a good night). Cesar Ramos, though, may have gotten the biggest out of the game. Given the circumstances of his spot on the team, it also may have been the most gratifying performance from an organizational standpoint.

Hopefully we'll have many nights like this one where we get key contributions from multiple players. That was what made us successful over the final two months of last season and even the past few weeks of spring training, so it was good to see it carry into the early season.

Congrats to Cesar on his first hold (and Jed on his first win). It's always good to get that first one out of the way.
Posted by Paul DePodesta at 1:00 PM 7 comments: